Jaipur, the capital of Rajasthan state in India, was founded in 1727 by Maharaja Sawai Jai Singh II, a Kachwaha Rajput, who ruled Jaipur State from 1699-1744. Initially, his capital was Amber, which lies at a distance of 11 km from Jaipur. He felt the need to shift to his capital city due to the increased population and growing water scarcity. Jaipur was the first planned city in India, and the King took great interest while designing this city of victory. He consulted several books on architecture and architects before making the layout of Jaipur. 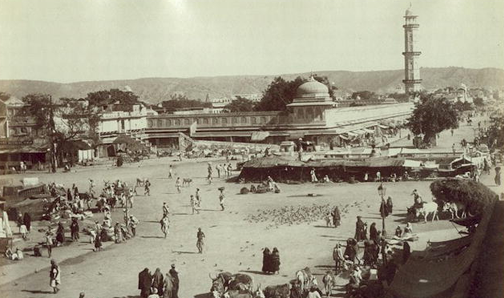 Holi - the festival of colors - is undoubtedly the most fun-filled and boisterous Hindu festival. It's an occasion that brings in unadulterated joy and delight, fun and play, music and dance, and, of course, lots of bright colors!

Gangaur festival is celebrated in honor of Goddess Parvati (Gauri) in March-April. A manifestation of Parvati (Lord Shiva's wife), she represents purity and austerity.

The Hindu festival of Teej is marked by fasting of women who pray to Lord Shiva and Goddess Parvati, seeking their blessings for marital bliss. It is a three-day festival that occurs on the third day of 'Shukla Paksha' or bright fortnight of the moon in the Hindu month of Shravana or Sawan, which falls during the Indian monsoon season, i.e., July - August.

Deepawali or Diwali is undoubtedly the biggest and the brightest of all Hindu festivals. It's the festival of lights (deep = light and avail = a row, i.e., a row of lights) that's marked by four days of celebration, which illuminates the country with its brilliance, and dazzles all with its joy. Each of the four days in the festival of Diwali is separated by a different tradition, but what remains faithful and constant is the celebration of life, its enjoyment, and goodness.