The royal family of Shahar is Kachawa Pichonot Rajputs, the descendants of maharaja Prithvi Raj, who was the ruler of Amer from 1559 AD to 1584 AD. The family is the proud owner of the Shahar fort, built by Thakur Hari Dass Ji in 1500 AD. The fort is located 130 km northeast of Jaipur towards Agra. It faced a lot of attacks and invasion attempts from the Mughals and Marathas due to its strategic location at the border of Jaipur state.

The Rulers and Scions of the Shahar Royal Family are remembered for their bravery and courage. Thakur Bharmal Ji, Thakur Durjan Singh Ji, and Thakur Udai Singh Ji fought many battles against the Mughals and the Marathas in 1678 AD. Thakur Udai Singh's son Thakur Jagannath Singh, the ruler of Shahar, was the Chief of Mirza Raja Jai Singh I Ruler of Amer, Army 1678 AD.

The next ruler Thakur Umaid Singh of Shahar fought many battles too. In one of the battles with the Jats of Bharatpur in 1767 AD, he died fighting bravely till the last breath. Jaipur forces won this battle, and the Bharatpur Jats were defeated.

The Maratha Holker's Army surrounded the Shahar Fort during his rule. Still, they were given a tough fight by Kachawa Pichonot Rajputs of Shahar, and their attacks were repelled, and cannons were captured, which were presented to the king of Amer / Jaipur by Thakur Raghunath Singh of Shahar. His descendent was Thakur Raghunath Singh.

Thakur Amar Singh's descendent fought another battle with the Muslim Chief of the Mughal Army, Ashraf Khan. The Mughal Army retreated and ran away, leaving all their Arms and Ammunition. His descendent, Thakur Bakatawar Singh, had been a brave ruler. The last ruler of Shahar, Thakur Jaswant Singh's son Colonel Virendra Singh fought "the" 1971 Indo-Pak war with the same valor, bravery, and courage as his ancestors did. He kept up the high tradition of his family and the name of his brave ancestors alive till the end.

Shahar Palace in Jaipur is an 80 years old residence and has been converted into a hotel. This heritage hotel in Jaipur has been running for the past 20 years by Colonel Virendra Singh and his wife Nalini Singh, the scions of the Royal Family of Shahar and Kunai. Since he retired from the Army in 1990, Col Virendra has sought to replicate this cozy intimacy in his ancestral home. 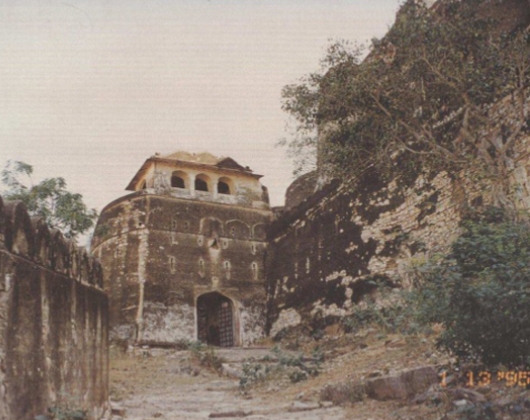 This Fort is situated in Nadauti Town, District Karauli, Rajasthan.